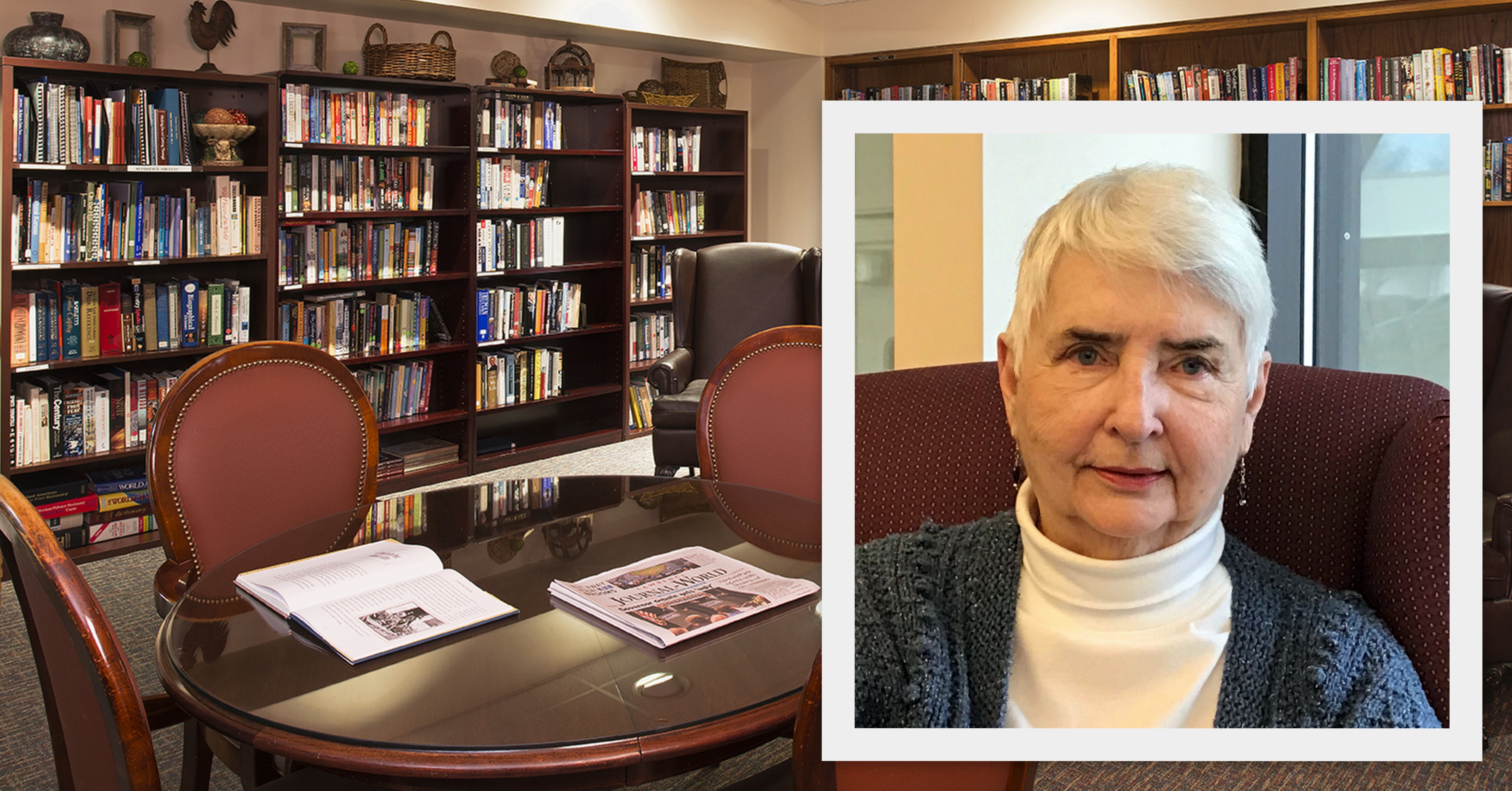 In her work on the library committee and as de facto community librarian, Mary Burchill has learned a thing or two about the reading habits of her neighbors.

“A lot of the ladies like books with happy endings,” Mary said. “Probably by this time in life you’ve had enough traumatic experiences, so we have a lot of light reading. Male residents, a lot of them have been in the service, and they like to read historical books about the Navy, Army and Air Force. They read them, plus they donate a lot to us.”

Mary and her husband Brower moved to Lawrence Presbyterian Manor in 2001, and Mary took on the work of community librarian almost immediately.

“When we moved in, I was 65. He wasn’t old enough, so he had to come with me,” Mary, now 85, said of her husband who is now 82. “I’ve been the chair of the library committee for almost that entire time. It’s still fun to do, and I enjoy doing it.”

Mary’s work as librarian at Lawrence Presbyterian Manor is an extension of her career. She worked as a librarian for the University of Kansas School of Law, retiring as associate director. Brower also worked at KU as a professor of cell biology before retiring as assistant chancellor.

The library is home to roughly 1,000 books, and the committee has a policy that they only purchase books published in large print editions. Thanks to the library’s relationship with the Lawrence Public Library, a number of additional books make their way to the Manor’s library shelves.

“We have a fine public library,” Mary said. “Once a week, they bring a collection of large and regular print books. People can choose which books they want to read and bring them back, and they can place books on hold if you want. There are no fines at our public library, so you can keep it until you’ve finished reading it. That service is used a lot, and we’ve missed it in COVID times.”

Mary said in her personal reading, she varies between fiction and history. Her favorite author is Canadian mystery writer Louise Penny. She suggests beginning with the author’s first book, “Still Life,” because the characters live on in subsequent novels. To satisfy her craving for history, Mary said she often turns to David McCullough, who is well known for writing about American and presidential history.

“I just finished ‘The Zealot and the Emancipator,’ about John Brown and Abraham Lincoln. His books are just magnificent,” Mary said. “If you put some of those things from history books in a work of fiction, you’d say ‘that can’t be true.’”

But Mary isn’t just a reader — she’s an author, too.

After retirement, Mary and Brower worked as park rangers at Bandelier National Monument in New Mexico and later at the Grand Canyon. While investigating the park’s library, Mary discovered the story of Evelyn Frey, who ran a primitive lodge with her husband before the area was declared a national treasure. The book, titled Lady of the Canyon, focuses on Frey’s extraordinary life in the American southwest.

Mary is also working on another book about Lawrence legend Elizabeth Watkins. After Watkins’ husband died, she wanted to use her wealth to advance Lawrence and its children. She established the Watkins Museum, built the town’s first hospital, and helped finance two scholarship halls at KU, as well as a number of other institutional buildings in Lawrence. Mary is working with a co-author and hopes to have the manuscript completed this year.

Mary said she’s happy to keep the community stocked with reading material, and she enjoys the opportunity to visit with residents. The library has a pretty easygoing checkout system: Borrowers write down their names and the title of the book they’ve checked out, then they cross it out when the book is returned.

“Some of the workers in the Manor read and bring us books,” she said. “Everyone seems to get involved.”

Before COVID struck, Mary and her husband enjoyed taking cruises to faraway places, as well as visiting with their three children, three grandchildren and great-grandchild.

Posted on
February 25, 2021
by
filled under
Residents
« Back to Blog