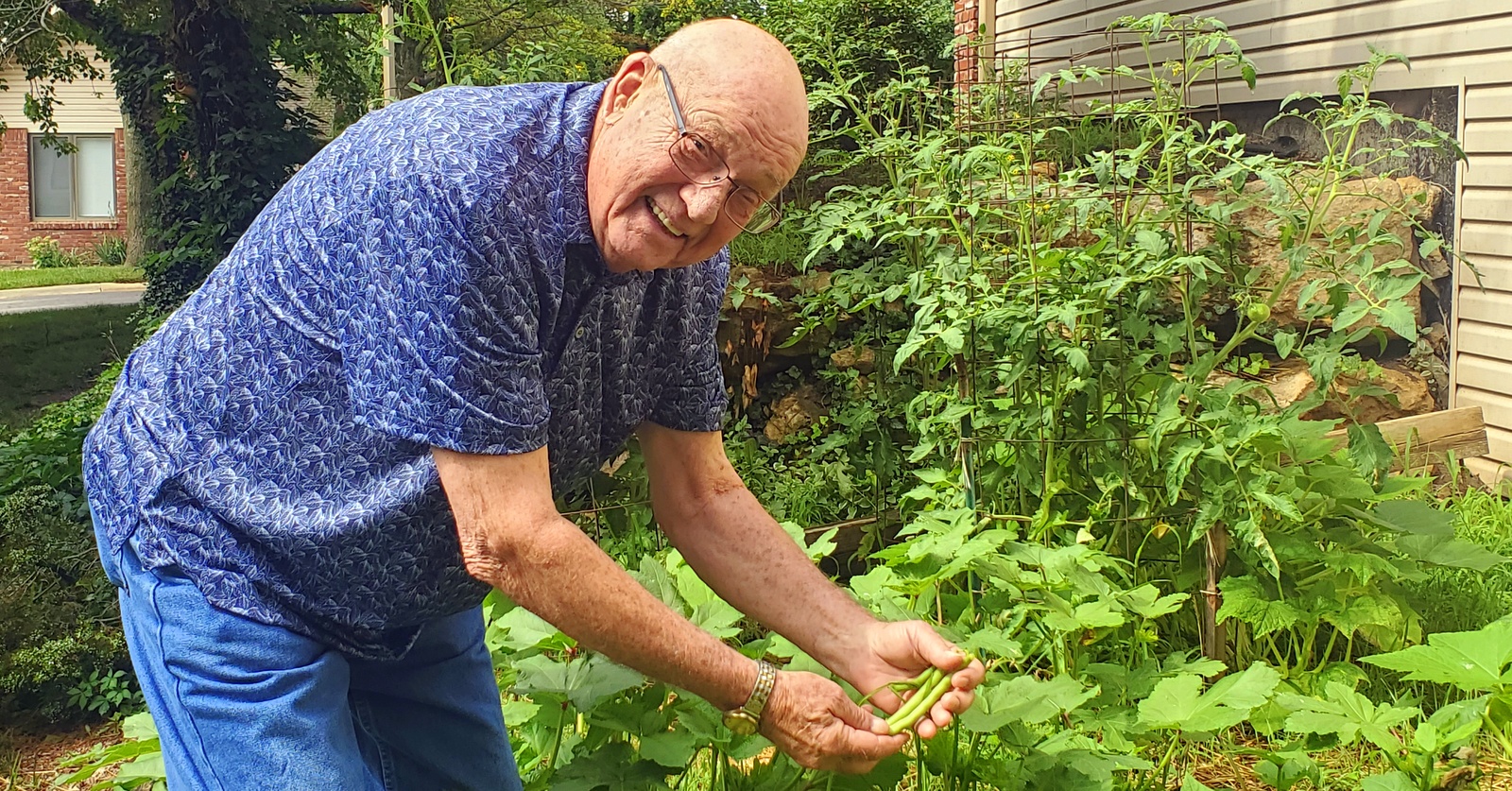 Henry Roberts and his wife make a great team when it comes to managing their backyard garden.

“I plant. I enjoy hoeing and pulling weeds, getting down on my knees trying to keep the rows free of weeds,” Henry said. “My wife, Kerstin, she helps me pick the produce when it’s ready. She’ll help me pick green beans and okra. And she certainly helps prepare the meals for us.”

Gardening has been a part of Henry’s life since he was a small child. For the past nine years that he and Kerstin have lived in Lawrence Presbyterian Manor, they’ve cultivated a small patch of soil as a produce garden.

“When I grew up, my parents had a wonderful victory garden,” Henry recalled. “I was just a little boy. My dad didn’t necessarily keep that up, but I guess I get my gardening prowess from my grandma. She had a big garden in Alabama. I moved to Ottawa (Kan.) when I was called to be pastor of the Presbyterian Church in 1972 — that’s when I had a big garden myself.”

His go-to crops are tomatoes and green beans. He also enjoys planting spring onions as well as okra and squash.

“The tomatoes are just starting to come on,” Henry said. “I just picked two and had a couple on the other day. If I can keep the squirrels or opossums from coming to eat them up, I’ll have a good crop of tomatoes.”

But for Henry, the art and act of gardening is more than the sum of the produce he gathers at the end of the season.

“It’s just a marvelous thing to be able to have a seed: a small infinitesimal seed that you can plant in the ground, and nurture to see it grow, and harvest a crop,” Henry said. “To me, it’s kind of a God thing. I think that’s how I kind of see my life. We grow. We start out small and develop ourselves over the years. Then we’re able to harvest and be productive and efficient and reap some of the benefits.”

There’s also a certain wonder in the ability to share the bounty with others.

“I share with the neighbors. I think they appreciate that,” Henry said. “We had an Airstream trailer and traveled a lot the past 20 years. I’d get a garden going, then I’d invite all the neighbors to come over and pick the produce when we’d go off somewhere.”

When it comes to Henry and Kerstin, they have perfected recipes over the years to capture the most flavor from their work.

“We slice up the tomatoes and eat them. My wife has a nice recipe where she marinates them in French dressing, and maybe some olive oil. Let them sit for an hour or two, and they’re awfully good,” he said. “We also enjoy them on BLTs and sandwiches. There’s nothing like a garden tomato.”

Henry also encourages anyone who can to dig their hands in the dirt and find their own joy in gardening:

“If people are healthy and had gardens before they came to PMMA, I would encourage them to have one. You don’t have to have a big one. I have a wonderful deck, and on it I have a pot for patio tomatoes. People can get several above-ground pots to grow things like thyme and sage. My hope is that as a result of sharing, it might lead someone to start a garden in their own townhome.”

Posted on
August 30, 2021
by
filled under
Residents
Aging Well
« Back to Blog