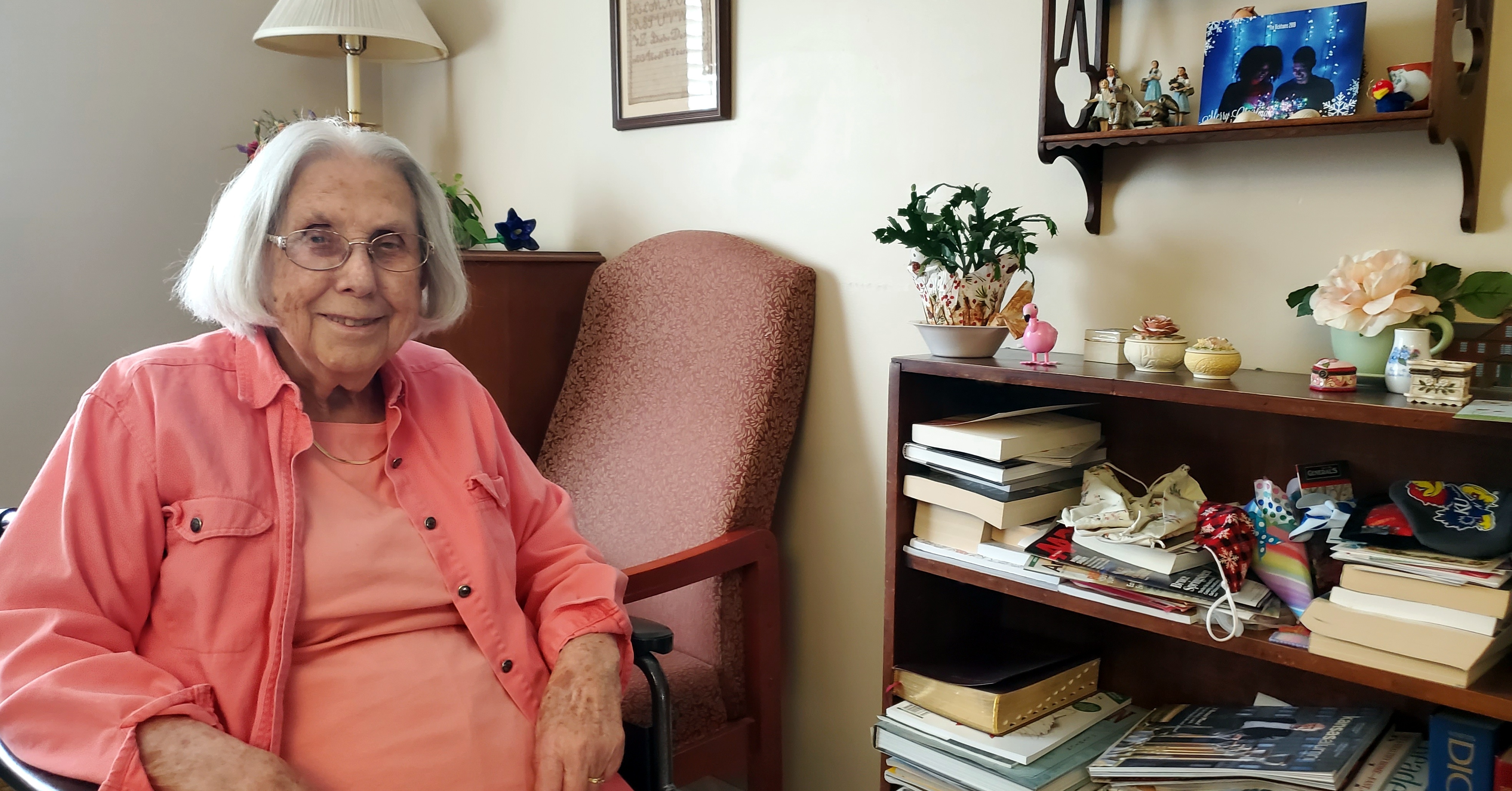 Dorothy Maxwell has read a lot of books in her 98, nearly 99, years.

“When I was in high school, my ambition was to be a librarian,” Dorothy said. “Even in college, I thought when I graduated I’d go to the library in Illinois. The library has always been a second home for me. I find it comes in handy for Jeopardy, and a lot of other question and answer programs.”

It hasn’t hurt her skills at the Wii version of Jeopardy, either.

“I find I’ve picked up a lot of information,” Dorothy said with a laugh.

A resident of Lawrence Presbyterian Manor since 2003, Dorothy said she prefers a good mystery book over most others.

“I’m not much for romance,” she said. “Some are all right, but I like to have a little question.”

Dorothy recently entered the annual Art is Ageless® competition with her floral bouquet made entirely of buttons. By twisting the buttons together with wire, she was able to craft the arrangement, which she displayed in a salt and pepper shaker set repurposed as a vase.

“You need a good assortment of buttons to begin with,” Dorothy said. “It was fun, but I had never done it before. It was a cute idea, and I had some cute buttons to use.”

Throughout her time at Presbyterian Manor, Dorothy has been involved in a number of activities on campus, including bingo, knitting, and anything that will keep her active and connected with others.

“I used to quilt and knit,” Dorothy said. “I like to cook and bake. Everybody liked my chocolate pie. I even baked one after I moved up here for the pie supper.”

“I have a pretty small family,” Dorothy said. “I have one son and one daughter. And the son has a son, the daughter didn’t have children. We’re getting kind of thin. But I’m going to be a great-grandmother this month!”

Dorothy said she’s enjoyed her time at Presbyterian Manor, and she feels right at home.

“It’s nice and homey, and the people are friendly,” Dorothy said. “The people, you meet them, and they speak and it’s nice and friendly. You walk in the door, everyone is pretty much happy, and they know each other one way or another. I tell people it’s a little town inside of a big town. People really know each other.”

To learn more about how you can enjoy Lawrence Presbyterian Manor like Dorothy, contact Jenni Jones at 785-841-4262 or jjones@pmma.org.