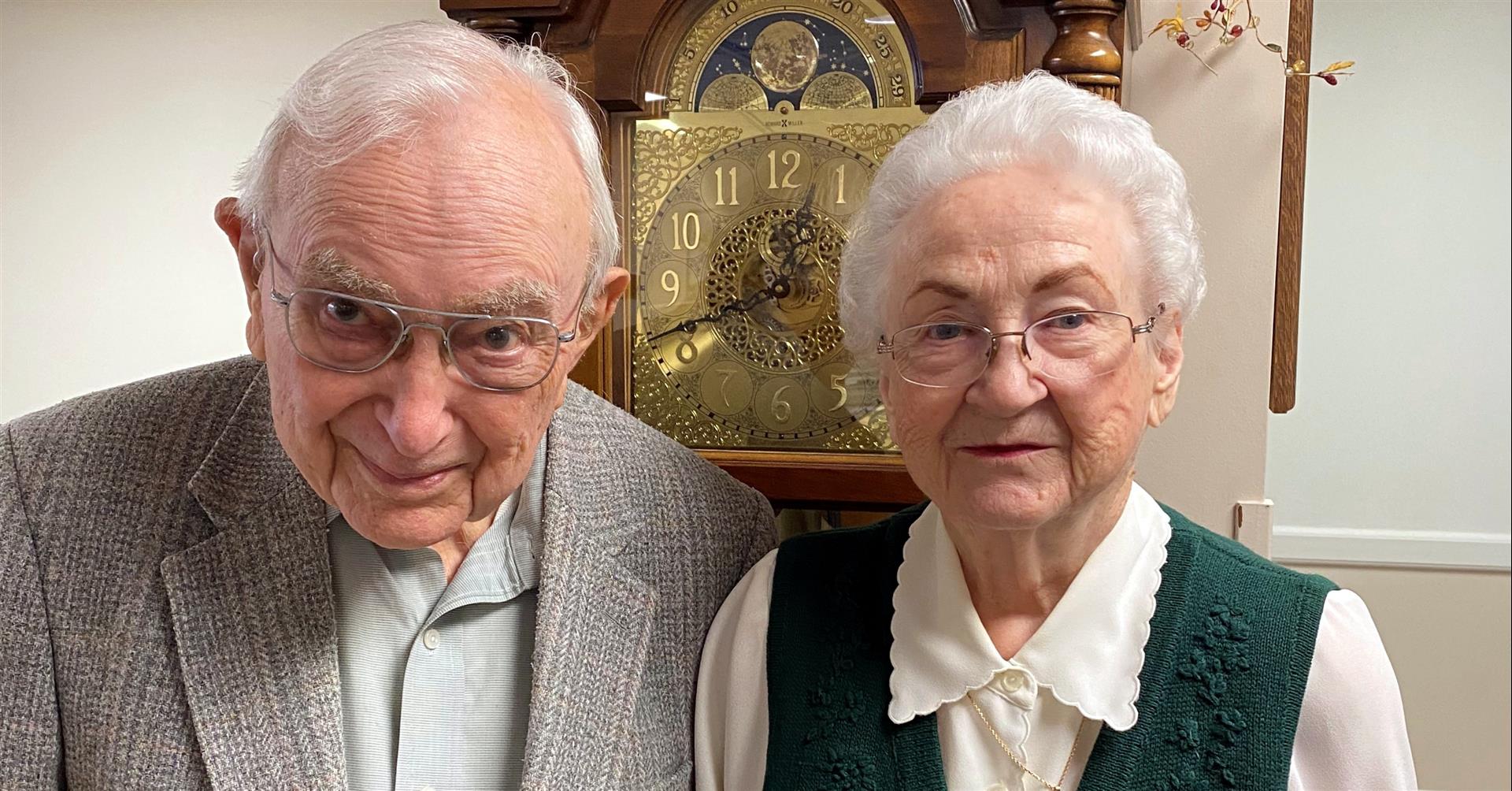 The story of how residents Vernon and Marilyn Chamberlin met is all about being in the right place at the right time and having a mutual acquaintance playing matchmaker.

“Vernon was teaching at a high school in Kansas City, and I was in nursing school at the KU Medical Center in Kansas City in 1953. He visited a patient in the hospital where I was training, and the nurse’s house mother was visiting the same patient. She asked him if he’d like to come to the nurse’s Christmas dance, and he asked her to arrange a date. So, we met at the Christmas dance and dated after that for a year,” said Marilyn.

The two hit it off instantly.

“She was very self-confident and patient. I liked the idea she was in a profession where she was helping other people,” said Vernon.

“Vernon gave me a corsage and my formal was net and the corsage kept falling off. I had to go up to the room to get a safety pin and he was patient and pleasant and we enjoyed getting acquainted,” added Marilyn.

They became engaged in 1954 when Marilyn graduated from nursing school and were married in 1955 at the Danforth Chapel on KU’s campus.

During their first year of marriage, Marilyn continued worked at the KU Medical Center as a nurse and Vernon finished his PhD at KU. Then they took a job at UCLA for two years where their daughter, Marlene, was born. They then moved to Stillwater, Okla., where Vernon worked at Oklahoma State University, and that’s where their son, Mark, was born. Then they moved to Lawrence in 1963 where Vernon took a job at KU.

“Vernon was hired back at KU and specialized in teaching 19th century Spanish literature. He published extensively and frequently and presented papers at national and international conferences. He’s also quite interested in German and learned to read Russian as part of his research,” said Marilyn.

During their years in Lawrence, Marilyn worked as a registered nurse at Lawrence Memorial Hospital and served on the Douglas County Public Health Board in the 1980s. She was also a charter member of the group that founded hospice care in Douglas County in the 1970s. She has a long-standing interest in geology and family history.

“For as long as I can remember, I wanted to be a nurse. I’m not even sure what nursing was or what nurses did, but I never wanted to do anything else. I thoroughly enjoyed it,” said Marilyn.

Vernon retired from KU in 1996 and Marilyn retired from Lawrence Memorial Hospital in 1995. They moved into the Presbyterian Manor in December 2019 and are enjoying their new lifestyle and friends.

“I’m enjoying not cooking and Vernon has been really pleased with the friends we’ve made,” said Marilyn. “We’re looking forward to having the security and services available and not having to maintain a household with all of the responsibilities and challenges,” said Marilyn.

When asked what their secret was to a happy marriage, the couple shared this:

“We worked together, trying to help each other,” said Marilyn.

“As I repeatedly tell my wife, I’m the luckiest guy in the world,” said Vernon.

Posted on
January 8, 2020
by
Cindy PMMA
filled under
Residents
« Back to Blog