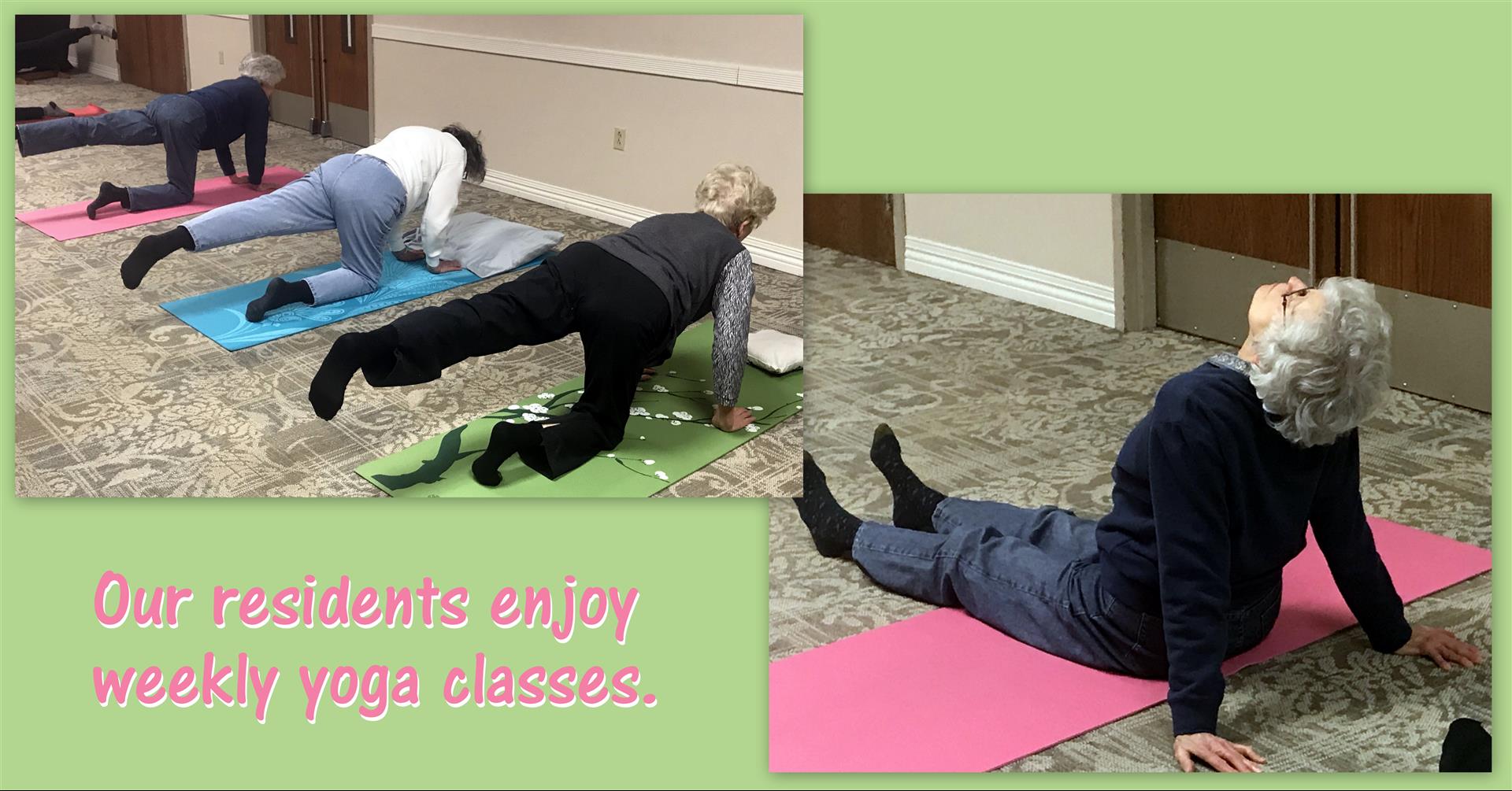 For more than 5,000 years, people all over the world have been practicing yoga as a way to find peace and harmony while improving their overall health. In 2015, that practice made its way to Lawrence Presbyterian Manor through a class offered by Lawrence’s Department of Parks and Recreation.

The class, which is held each Wednesday afternoon from 1:30 to 2:30 p.m., is taught by Mary Ann Saunders, a woman who has been a dedicated practitioner of yoga herself for most of her life.

“I learned yoga in college a little over 50 years ago. I had really injured my back practicing for a final in my Modern Dance class and I herniated a disk,” said Mary Anne. “A grad student said ‘you need to learn yoga’ so it was that wonderful person that introduced it to me.”

As a virtually no-impact form of exercise, Mary Ann has found that yoga is not only a good way to help people recover from an injury, but it can actually help prevent injuries from occurring in the first place.

“Yoga has you move very slowly in and out of the postures or asanas. That, and learning to listen to your body and its limitations, is what makes yoga an excellent form of exercise for anyone, but especially older folks who are living with more and more limitations the body has as it ages,” said Mary Ann.

While residents in the community have numerous options when it comes to exercise, Mary Ann believes that the hands-on nature of yoga combined with the watchful eye of a trained instructor adds benefits that cannot be obtained by watching a video or simply working out alone.

“I watch my students to make sure they are moving correctly and slowly so as to minimize injuries or soreness. If you are sore, you do not want to do what made you sore,” said Mary Ann. “I hope that all of the students leave the class feeling good—the whole process should leave you feeling relaxed and energized at the same time.”

Since its inception, Mary Ann’s class has attracted a devoted following and, over the years, she has been able to witness her students’ improvement firsthand while developing some close personal relationships.

“I have really enjoyed getting to know the folks in this class,” said Mary Ann. “Some have been a part of it since we started in 2015, and it is very gratifying to see folks start to feel better after just a few weeks of class.”

Posted on
August 24, 2019
by
Cindy PMMA
filled under
Aging Well
Wellness
Exercise
« Back to Blog